With a week to go, 59 teams had signed up for the competition.  Unfortunately, not all teams were as brave as us and 30 teams didn’t turn up/withdrew from the competition due a little weather fear.

Fourteen children from year 5 & 6 braved the conditions of ‘Storm Doris’.  Arriving at Lee Valley Hockey and Tennis Centre, South Grove A Team and B Team were placed into their group pools and began their day with training drills lead by sports leaders from Chingford Foundation and volunteers from Waltham Forest Hockey Club and England Hockey.

The competition was fierce, not only from the vicious wind blowing us around but the level of talent was extremely high.  Both A and B team made it through to the quarterfinals.  However, B team were knocked out from their pool during a penalty shoot out.  It was up to the A team to bring home glory for South Grove and they didn’t let us down. The A Team won their quarterfinals after an extreme battle during penalty shootouts as well.  In fact, it was neck-and-neck for so long that we eventually had to move onto the official Olympic size goals to make it more challenging. Luckily, South Grove won and made it through to the semi-finals.  Excited yet exhausted, the pressure really stepped up and the children fought with every step that they could to win the bronze medals.  It was a very intense game and the children were a credit to South Grove.

Final places were as follows: 1st place went to Handsworth, 2nd to Thorpe Hall and third to South Grove.

Congratulations to all the children who took part in the event and to the parents for their support. Their photo has been added to the ‘Shelve of Fame’ area in the library. 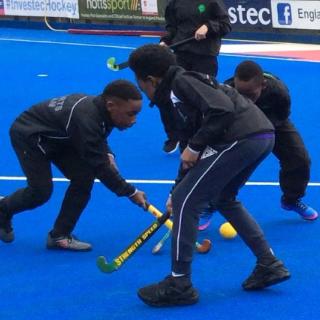