Play in a Day!

Romeo and Juliet By Akash and Jiya 6M

Year 6 had a chance to perform a wonderful play known as Romeo and Juliet. We were accompanied by a man who represented SPLATS (Paul). Paul is part of a theatre company where they come into schools and teach the pupils a variety of different plays. We were split into 4 groups, each practicing a different scene. We wore black and were given props to disguise ourselves as the character we had chosen. Throughout the day, we practiced our lines and perfected our acting skills. We then performed to Year 4, Year 5 and some of our parents.

Here is what some of the Year 6 pupils said about the day:

Owais said, “What a fantastic day! I loved being Juliet and performing to the parents.”

Taizjan said, “I had been looking forward to the performance since I had found out it was going to happen as it is my favourite play by Shakespeare.”

Jacob said, “I loved that we could perform in front of a live audience and also that we used olden language.”

Sarai said, “I loved learning about the characters and becoming them through acting.”

Take a look at some of our photos! 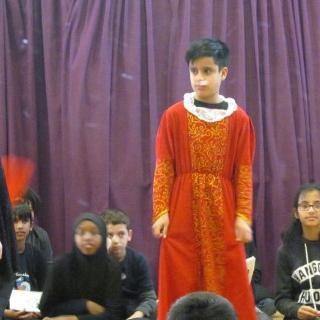